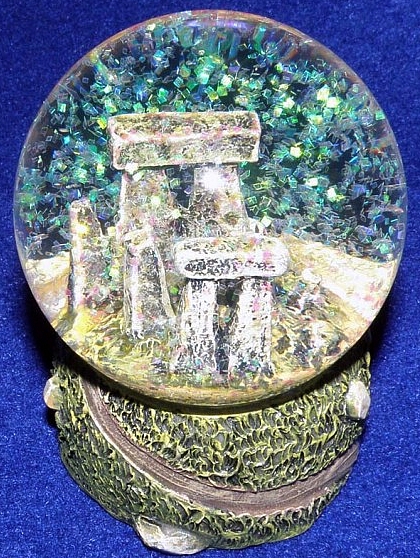 Last year on Christmas we posted a photo of the English Heritage Stonehenge snowglobe, the one sold in the shop near Stonehenge. So it seems fitting as the holiday approaches to post another snowglobe somewhat less official, but certainly modeled roughly after Stonehenge, as proven by the trilithons and the packaging, which includes this bit of art: 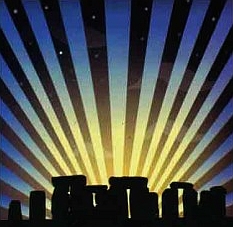 There can be no doubt that is Stonehenge. As Bob at Stonehenge Collectables says, “Had the graphics artist who produced the artwork for box and label created some stones graphically and not used an identifiable view of Stonehenge taken from the south, looking north, any commercial connection to Stonehenge could be disavowed.” True except, as we said, for the trilithons, which you won’t find in any other ancient stone circle we know of.

We’ll give this 5½ druids, partly for that little walkway spiraling up the base toward Stonehenge. It would be six if they’d used something white instead of that clear plastic glitter. Don’t they know that’s for unicorns?

We”ll end with this photo of last year’s and this year’s globes, and a warm wish for a joyous Yule season for all of our readers, wherever and whoever you are, whatever you believe, and whoever you love ! 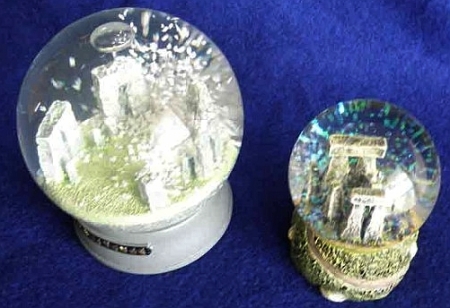 [And for extra holiday fun from last year, click here to see the Stonehenge model at Babbacombe Village while decorated for Christmas last year.]