photos and hengery by Bill Bevan, with permission

Oh, why don’t people take ancient monuments seriously?! The way we do. Heh. Well, here is a stuffed giraffe examining a Stonehenge replica (of the just-a-few-trilithons variety) that was made of lemon slice, carrot cake, and chocolate brownies, set on a golden plate, which is set on . . . is that a faded beach towel?

Our studied analysis: While he projects a mood of play, the henger here has a serious agenda, suggesting that the toppled stones at Stonehenge were toppled by the curiosity of ancient northern woolly giraffes that lived in the times of the mammoths. This discovery pushes the age of the building of Stonehenge back to the ice ages. The alternative at which he barely hints is that the stones were actually erected by ancient sentient giraffes, a branch of the family which has since gone extinct!

Exciting stuff. Almost too controversial for our humble blog, which is simply a bit of light entertainment. But wait, there’s more. 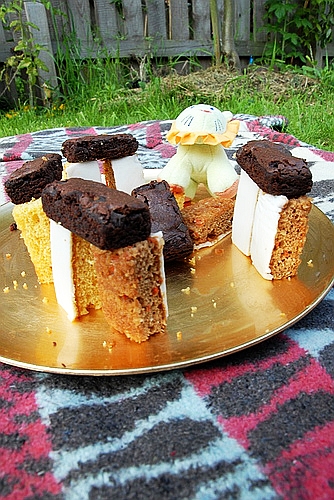 Giant crosses between lions and daisies also appear to figure into the theory! This is way over our heads. Could Stonehenge have been a corral for megafauna? And what about the cake? He gives some cryptic explanation here. Warning: one or two of the close-ups of trilithons seem barely decent!

Score for this henge: 6 druids. Why six, you say? Sometimes things are just so bad that they’re good. And we think he knows it. Quote: “My 14 week old daughter thought Spongehenge was pretty funny, though that might have been wind!”

Bill Bevan’s impressive photos of the real Stonehenge can be seen here, and are worth a look. Click on the word Gallery at the top for more amazing photos from around the world.