photo by deadeyebart a.k.a Brett

Now we have proof that henges, once assembled, turn into living things! This blockhenge, shown near the bottom of our Virtual Hengefest page, moved itself to a new location, and we know this due to its documentation by Brett Fernau, aka the Mad Henger, aka deadeyebart. We know he wouldn’t kid about something this serious! 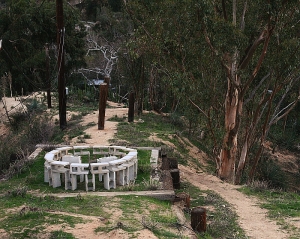 The Flickr caption says, “Under mysterious circumstances, Blockhenge has been relocated and recreated. Its sudden reappearance has confused scientists who have stated that further study is needed. Personally, I think it’s evidence of alien activity.” It is soothing to know that scientists are working to solve the mystery, but we’ve been posting henges long enough to be convinced that aliens are not necessary as an explanation of peculiar activity on this planet! We carbon-based lifeforms do very well on our own, thank you.

This is a simple replica with no bluestones, altar stone, heel stone, or ditch and bank (although the square enclosure makes a gesture toward that element). It is nicely done, however, and appears to include two inner trilithons. Score: 6 druids.  We like the view off the platform in the first picture. Maybe the henge moved there in order to take it all in!

One thought on “Blockhenge Relocated”