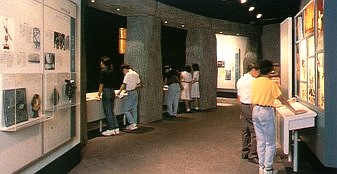 photo from the website of the Hong Kong Space Museum

We found a couple of partial replicas that should be mentioned, but neither is complete enough, nor do we have good enough pictures, to warrant a full post for each. The one above is in Hong Kong’s Space Museum, part of a demonstration of ancient astronomical history.

The site says it “has a special effects projection of the midsummer sunrise over the Hell [sic] Stone of Stonehenge to gradually recreate the illusion of dawn.” Yes, we know the Hell Stone is a dolmen in Dorset, but who are we to correct such a delicious misspelling? 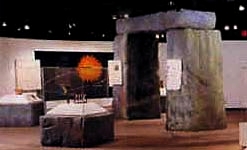 The second is a trilithon (Yes, we have learnt to spell it properly!) at The National Watch and Clock Museum in Pennsylvania. In this case it is part of their Ancient Timepieces Gallery.  It is rather a handsome thing, from what we can see, but not proportioned accurately to the trilithons at Stonehenge itself.

We’ll give the Hong Kong structure 5 druids for now, and the Pennsylvania trilithon 4. What is interesting is how their juxtaposition underlines the why behind the “surprising” finding archaeologists are always making that this or that ancient or “primitive” culture had a very detailed understanding of the movements of the bodies in the heavens. Astronomy, for millennia, was timekeeping, and every society, even the simplest, had a need for it.